rse and prevent: what parents are asking and why it matters 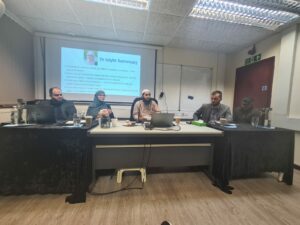 At a recent event I spoke about Prevent to parents who had gathered for something that may seem unrelated to counter-extremism: the changes in the curriculum with regards to relationships and sex education (RSE).

It was a rainy Saturday afternoon, but the event was well attended by committed and concerned parents.

I had been invited to speak about one of the many concerns raised by parents in relation to Relationships and Sex Education (RSE) and their concerns about refraining from participating in discussions regarding this aspect of their children’s schooling.

When surveyed on why they did not want to participate in RSE discussions, 3.4% of parents said it was because of Prevent, the government’s counter-extremism policy.

Despite the disturbing nature of their concern – the presence of a counter-terrorism policy in the educational context – I found this statistic reassuringly low, and I was glad that there was not a fear of something that Prevent Watch has not seen cases of on the ground, which is Prevent referrals related to matters of RSE.

However, as one parent mentioned to me, what I define as a Prevent referral “unrelated” to RSE, was in fact a referral linked to RSE, with Prevent. An example of this, was the child who was referred to Prevent for making an alleged “homophobic comment” It was alleged by his peers that he had made threats against homosexuals, however the child said he had simply stated that he did “not like homosexuality. It is against my religion”. This led to an interrogation by counter-extremism and policy.

Although I claimed that the referral was not RSE-related, a parent rightly pointed out that the child’s religious views about homosexuality, were a sticking point for the Prevent officer who interrogated him for half an hour. Had they been aired in RSE classes, they almost certainly would have led to a Prevent referral.

We have not had RSE-specific referrals come through to Prevent Watch, but this doesn’t mean they don’t exist, and there may well be many RSE-specific and RSE-related referrals of which we are not aware.

The Home Office does not reveal the specific reasons why a child is referred to Prevent, and we only have access to the basic statistics related to demographics and age, and even then with caveats for example 15 to 21 year olds as one age group, when we know that a child is an individual under 18 in the law. Indeed, the opaque nature of Prevent related-statistics is a subject on its own.

It was interesting that most of the questions that Saturday evening were directed at me despite sharing a panel with a number of other experts. This was not due to any notions of Prevent Watch’s popularity, but due to the genuine fears of parents and feelings of self censorship related to RSE and Prevent.

One parent asked about how worried they should be about their confident articulate and proudly Muslim child, while another asked how a school could take more responsibility for regulating the presence of a Prevent officer at the school, and the interrogations sessions themselves.

The fears of parents are many and enough in the normal journey of raising children today. Surely their education should be a source of relief rather than of fear.

As part of the People’s Review of Prevent we published earlier this year as an alternative to the Government’s Shawcross review of Prevent (which has been delayed by more than three years), we raise an important point about the securitisation of spaces such as schools and colleges.

We emphasise the importance of professionals such as teachers using their professional and moral judgements rather than resort to Prevent as a default, securitising matters that would be better dealt with as ‘teachable moments’ at school.

It is comforting that there are schools that have certainly exercised their own professional and moral judgements despite the pressure of Prevent being a legal duty.